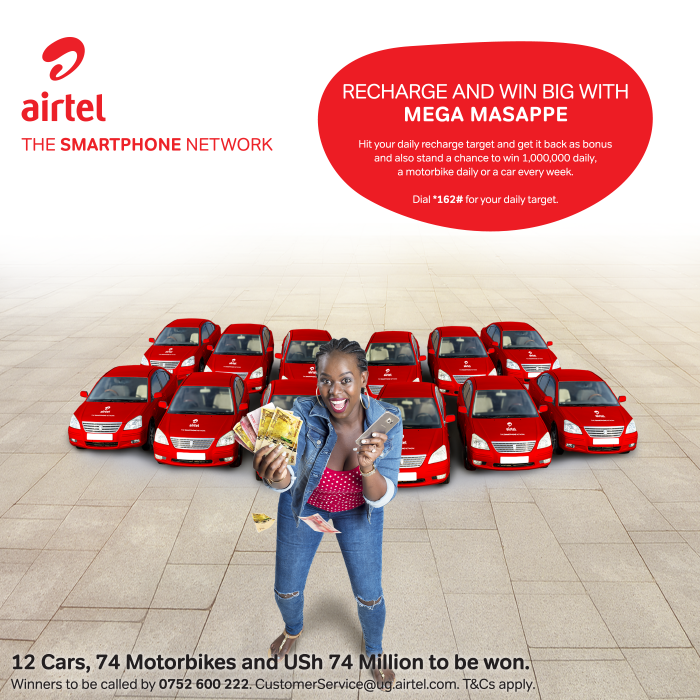 Telecommunications giant Airtel Uganda on 3rd July 2017 announced a new exciting recharge and win promotion dubbed Mega masappe where customers will win daily and weekly prizes in this exciting promotion over the next 90 days that include cars, motorbikes, cash in the various draws.

The Mega masappe promotion which will run for 90 days comes in after the recently concluded airtel masappe data promotion where customers enjoyed double data each time they loaded 100 or more mbs on their airtel line.
Airtel Uganda has always given back to its customers through their annual promotions in which they reward them with amazing prizes that include cars,cash per year as witnessed in 2016 where airtel customers were rewarded in the airtel yoola amajja campaign that so a grand prize of a chance to enter the money box that contained over 20million,luckily a lucky customer managed to scoop out a clean 16 million which was quite promising that airtel would apparently bring back similar campaigns in future.

Among the prizes to be won include 12 cars,74 motorbikes and 74 million worth of cash to be won in this 90 day mega masappe promotion,according to a press realease by Mr Indrajeet Kumar Singh the airtel marketing director expressed his excitement at the new promotion
“we made a promise to Ugandans to offer them the most reliable and affordable telecommunication services while directly improving their lives through our different offerings and campaigns,this promo is evidence that we are doing just that” he said

As part of the mega masappe promotion subscribers bonus shall be rewarded to them everytime they reach their target for example if a subscriber has a target of 3000/- and loads 3000/- he/she shall get 100% bonus of the same value under voice,sms,data split.However if the same subscriber loads the same amount he/she shall not get the bonus for the 2nd time in a row but rather wait the next day and hit the target again.
Daily and weekly prizes shall be given out every friday live on selected tv stations for the duration of the promotion

However all winners shall only be contacted by 0752600222 for quality assurance purposes.With airtel Uganda’s fast growing network share with us your view on this latest promotion by them to give back to their customers.

Game Of Thrones Returns With Season7