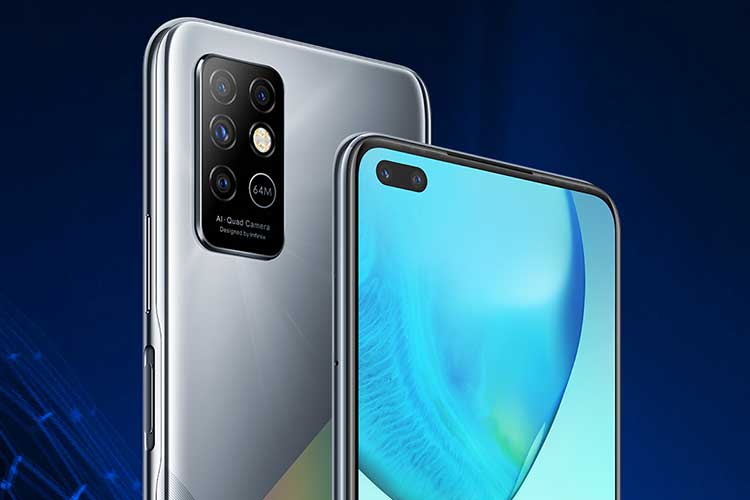 Infinix Mobile Uganda has today revealed plans of launching its latest Note series flagship in Uganda. The Infinix Note 8 will succeed the Note 7 which was launched mid this year with improved features leaping a new trend of Infinix Note devices without an Xpen.

As per insights from Infinix Mobile Uganda, the Infinix Note 8 will ship a new grade of features and a much affordable price tag attached to its mid-range status.

Headlined by a dual punch-hole display notch, Infinix Note 8 features are many tagged around its camera prowess tamed at a total of 6 Cameras with 4 to the back and a dual selfie lineup (2 lenses).

Much more like a standard, the Smartphone is expected to equip its fingerprint sensor on the Power button like on the Infinix Note 7. But unlike its predecessors, a 5200mAh battery capacity powers the device’s thorough uptime.

As per the rumored internals grade, the Smartphone is expected to ship a new MediaTek G80 chipset away from the old G70 equipped by the Note 7. The new G80 chipset is designed for better performance and response rates great for processor load services like Mobile Gaming.

Well, as per spills from Infinix Mobile Uganda, the Note 8 will be a choice for users who prefer a fast perfomance phablet, yet battery-centric without necessarily having to opt for a battery-designed releasee like the Infinix Hot 10.

Also, USB-C is rumored to be the supported charging port standard juicing the device’s 5200mAh inbuilt battery. However, with more features expected to be shipped by the Infinix Note 8, its price tag would further be a point to note since it’s a mid-range release.

The Smartphone is rumored to be priced between UGX 780,000 to UGX 880,000 with a slight margin from the Note 7 which is still available on the market.

With a launch date of 6th November 2020, we expect the Infinix Note 8 to be the greatest Note series release ever unveiled in Uganda by Infinix Mobile. For now, we can’t confirm the Smartphone’s performance and feature levels, but we shall discover what it has to offer once we receive a review unit of the device.

Odukar Store Black Friday Sale: Here is a list of the...

All You Need To Know About Itel P51 SmartPhone

DIGITAL IMPACT AWARDS 2017.HERE IS THE FULL LIST OF WINNERS