The Flash Borrows Problems From The Future 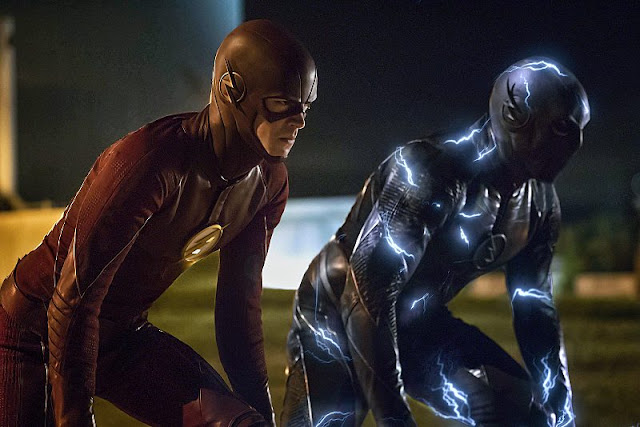 Season 3 of the flash or what you can call the flash point season,It all started when The flash (Barry Allen) after defeating zoom (Hunter Zolomon alias ‘Jay Garrick’) went back in time to stop the reverse flash from killing his mother,Little did Barry know that this was the biggest mistake since he could not change his destiny even when he could run back in time to save his mum,Well he defeated the reverse flash and saved his mum but this brought about a whole new tragedy where he created an alternate timeline (The Flashpoint),in this timeline things where different from the way he knew them! Wally west was kidflash and Edward Clariss was the main speedster villain,Barry suffered from loosing his memories and contacted the reverse flash (Eobard Thawne) who only laughed out loud and quoted “You stopped me from killing your mum,But soon you will beg me to do it again” The Flash didnt take it serious and instead continued loosing his memories not until the kid flash (Wally west) was killed by Edward Clariss which forced Flash to Ask the Reverse Flash to kill his mum again inorder to restore the timeline.The flash and reverse flash went back in time and fought but this time Flash gave in and gave up so Reverse Flash stabbed his mother in the chest as it was destined to be,The timeline was restored but with alot more difference where Cisco Ramon’s brother was dead,Caitlyn snow Had powers (Killer Frost),John Diggle from the arrow had a son and not a daughter as before and The Flash was nolonger doing foresics at Central city police.

The alteration of the timeline and creation of the flashpoint led to the rise of Dr Alchemy who gave powers to those that had them in the flash point just like Edward clariss got his powers and wanted to revenge against the flash with orders from Dr Alchemy,he failed and was killed by Alchemy under the God of speed Savitar.

Flash Deafeated  Dr Alchemy and he discovered he was Julie his boss at the forensics department in central city police,Alchemy used a stone he discovered in india and it gave him all powers he needed granted to him by savitar.
With the intervation of Savitar’s plans a new fight between savitar and Flash began where savitar’s stone was thrown into the speedforce where Flash ran into the future and witnessed Savitar killing Iris West(Barry’s Girlfriend),this left a huge blow on the flash and was saved by Jay Garrick (Earth 3’s Flash).

The Flash after witnessing the future he began on a struggle of how to alter the future by changing the past,The future news in the Older Wells ‘s time vault had writer Julie Gree and not Iris west indicating the Flash Vanishes in a crisis.Team Flash all focused on a way to alter the future and Caitlyn snow approaching Julie inviting him to join the team which he later agreed,HR wells being successful with his plan of turning Star labs into a meseum to make the outer world visit Star labs more Often,The kid flash defeating Plunder instead of The Flash as projected in the future before Savitar killing Iris.Team flash all set for more alteration of any future vilains and avoiding Iris’s death by Savitar.

A new Vilain Arrives in Central city with HR wells’s projection meaning he is definately on her wanted list,Meaning he’s in danger How will the team handle this? Keep on for more updates as the flash returns next week tuesday on the CW.